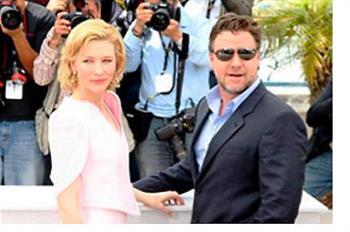 In any negotiation, you have points of influence and using them is how Russell Crowe influenced Cate Blanchett to secure her as the leading lady for the $155 million dollar movie Robin Hood. Russell Crowe was sitting before a room full of Australia Post executives and enthusiasts, but sticky stamps were the furthest thing from his mind.

He and filmmaker Ridley Scott were in the final stages of casting and preparation for the planned $155 million adventure Robin Hood, and there, sitting a seat away, was their dream leading lady. ‘I just asked her in front of 1000 people,’ Crowe chuckles as he reveals how he very publicly snared Cate Blanchett to star in the latest take on the 13th-century action hero Robin Hood.

Blanchett, fellow thespian Geoffrey Rush and Crowe were attending a ceremony last year for the 2009 Australian Legends Awards for their mark on Aussie culture when Crowe stood to make a speech. ‘We were on stage and I'm looking at Cate - I knew her for a handshake and all that, right, but I'd never worked with her or ever had a long and deep conversation with her,’ Crowe recalls.

‘But I'm looking at this exquisite beauty sitting next to me on stage and they gave me the microphone and I immediately turned to the audience and said, 'Don't you think it's time me and Cate made a movie together?' And the response was gigantic. ‘So when I called her the next day she knew what I was already talking about’ [“Herald Sun”, 6 May 2010].

In this example Russell Crowe created points of influence prior to the formal negotiations. By combining the use of a pre-planned question with the timing, location and atmosphere of the 2009 Australian Legends Awards, Crowe was able to gain public validation and pave the way to secure Cate Blanchett’s role in the movie Robin Hood.