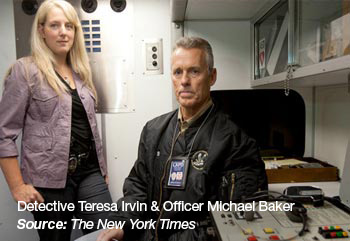 Imagine confronting a crisis negotiation the outcome of which may put lives at risk or save lives, particularly if you are included.

Fortunately when it comes to law enforcement we live in a world where certain individuals have the skills and are prepared to take personal risks to save lives.

In this extended issue of Negotiation Insights we have the rare opportunity of learning from the frontline and Officer Michael Baker of the Los Angeles Police Department (LAPD) Special Weapons & Tactics (SWAT) team. As a twenty-nine year veteran of the LAPD, with over 20 years’ experience as a SWAT tactical team operator, a senior Crisis Negotiation Team member and a volunteer crisis intervention counsellor with the L.A. Suicide Prevention Center, Officer Baker is an authority when it comes to crisis negotiations.

When you are confronted with the choice of walking away, (which is many times not an option), or having to decide between force and negotiations is a dilemma all law enforcement agencies confront. So what is the appropriate way to accomplish your goal of a successful resolution to a crisis? According to Officer Baker, “If you have the opportunity and proper skills to employ negotiations in an attempt to peacefully resolve a situation before the use of physical force, then negotiations must be considered as a primary method during that initial encounter”.

Successful negotiations offer additional advantages
Police are regularly being challenged by an increasing amount of contact with the mentally ill and violent individuals during the course of their daily duties. With this in mind it makes sense to first try negotiating a peaceful resolution, particularly when you contrast this approach to a tactical intervention that might increase the risk of harm to officers as well as suspects. Unlike a successful negotiation a tactical response also risks further incidents of litigation and increased costs to government agencies, and could negatively influence the future mindsets of suspects and the public toward law enforcement personnel and their abilities to perform their duties.

Demonstrate empathy to motivate discretionary effort
When asked what it takes to negotiate the freedom of a hostage unharmed, Officer Baker explained, “At its core you need to control the process and have skills that help the hostage taker define and analyse the problem in a way that makes them widen their perspective and feel understood. There is a distinct difference between understanding why a person may respond to situations in a certain manner and agreeing that response was correct and appropriate. When this “empathy” is communicated well with the suspect, the probability they will become more rationale and motivated to give the discretionary effort needed to resolve the crisis increases. More specifically this means you need to understand the hostage taker’s core interests, through the use of active listening and verbal communication”.

For example would you be more likely to give the discretionary effort needed for a peaceful resolution if you were being threatened with a tactical intervention, or prefer a conversation with someone who was trying to understand your emotions that could include anger, frustration, isolation and helplessness.

Conduct a post negotiation audit
To further validate his experiential learning Officer Baker, along with Detective Teresa Irvin, who is also a twenty-year veteran of the LAPD, conducted a series of post incident de-briefs, or what negotiators more commonly call a post-negotiation audit. So what did Officer Baker and Detective Irvin learn?

“The key findings were that during a crisis the interests of the individuals were not being adequately explored and as a result, negotiations never developed, and confrontations and altercations became more frequent. Productive negotiations, and ultimately the successful de-escalation of a potentially violent interaction, are the consequences of communications that are “interest-based” and competently implemented into the crisis negotiation evolution. Failing to address the core interests and issues that are overwhelming someone in crisis at that moment can exacerbate the crisis and result in a police officer becoming nothing more than an additional antagonist for the individual to resist and contend with rather than co-operate with”, said Officer Baker.

Find ways to create future advocacy
In concluding Officer Baker went on to say, “Recidivism is prevalent within the criminal justice system. Many subjects of barricades, hostage situations, and crisis interventions are unfortunately repeating their criminal behaviours at future times, becoming what is termed ‘repeat offenders’ within the criminal justice system. This reveals a further upside to conducting a post-negotiation audit. How a subject is treated during the interview process can positively influence the way they ultimately view law enforcement during any possible future encounters. Their opinions and perceptions of how they were treated by police will no doubt remain with them while they serve their time in prison, and when they are paroled and released. By police officers demonstrating their compassion and sincerity as people who truly want to perform their jobs better, criminals will hopefully recall some of the conversations that reflect positive feelings toward law enforcement, and those positive feelings may lead to a more eager attitude to engage in conversations and negotiations instead of resorting to a violent physical response when confronted by police officers.”

Whether it is a crisis in our personal lives, or business, perhaps the most compelling learning and reminder is that we all want the opportunity to be heard and understood, particularly if we are expected to give the discretionary effort needed to resolve a conflict.
Sources: Michael Baker Interview and The Royal Canadian Mounted Police Gazette: Gaining the perspective of a person in crisis.

Collaborating to create value: Power to the people

Creating points of influence: Russell Crowe gets his leading lady

Engaging the enemy: US and Taliban peace talks

Gun tragedies: We hear you

Identity needs: Tobacco now a nobody

In Focus: Negotiating with agents

In Focus: The authentic negotiator

Setting the scene: Automotive executives fly into a storm

The power of language: A statement or a question?