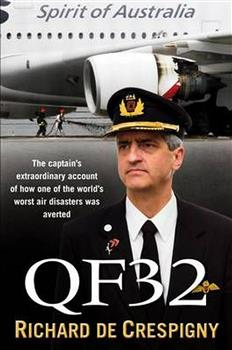 Have you ever been confronted with vast amounts of information that is ambiguous and complex? If you have, then it is also likely that you experienced high stress levels and feelings of being overwhelmed. In this issue of Negotiation Insights we consider what negotiators can learn from Captain Richard de Crespigny, who successfully managed an in-flight incident potentially more catastrophic than the US Airways Hudson River Landing.

At 9.57am on 2 November 2010 Captain Richard de Crespigny and his crew lifted off Qantas flight QF32 from Singapore’s Changi Airport, bound for Sydney. By 10.01am the plane was climbing at 2000 feet per minute and had just passed through 7400 feet, when the unthinkable happened. The number 2 engine exploded, causing a loss of power and catastrophic failure of the plane’s critical operating systems.

As a result Captain de Crespigny was now confronted with many of the plane’s 250,000 sensors generating information beyond his ability to absorb. In addition to conversations he now needed to have with the crew, he also had to manage conversations with other critical stakeholders including the passengers, Changi Airport air traffic controllers, and the Qantas Crisis Centre in Sydney.

It would be another 3 hours and 39 minutes before the flight safely landed back in Singapore, and the 466 passengers and crew started to disembark.

So what can negotiators learn from the facilitative leadership style of Captain de Crespigny, which resulted in what was potentially one of aviation’s worst disasters being avoided?

Firstly, rather than allowing himself to be cognitively paralysed by the volume of information that was being generated, Captain de Crespigny decided to focus on the process of “how” he would manage the critical incident.

Secondly, and as a result of his decision, he was then able to map backwards as the optimal way to problem solve. By taking this approach he could concentrate on “what” was needed to fly the plane, and to check if the essentials such as engine power, speed, altitude and fuel were available.

Thirdly, while Captain de Crespigny had the authority to give orders, he decided it would be more effective to maximise the crew’s discretionary efforts by disseminating information in ways that motivated the crew to listen and commit to his decisions. To achieve this he focused them on the common ground, which included the crew’s vast flying experience, referencing standard operating procedures and critical incident training.

For those that are interested in the full story, Richard de Crespigny’s book is titled QF32.