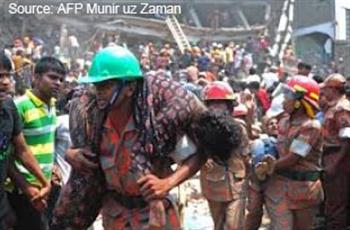 Whether it involves negotiating a treaty, resolving a contract dispute with a supplier, or responding to a disaster, the conventional practice is to offer a conditional concession when a deadlock occurs. In this issue of Negotiation Insights we look at the circumstances that encourage the early granting of one-sided concessions. Our example comes from the Bangladesh Rana Plaza factory building, which collapsed on April 24th 2013, killing 1129 workers and injuring approximately 2515 others.

Workers at the Rana Plaza factory in Dhaka, Bangladesh endured questionable safety standards and a minimum wage of $38 US a month. Following the tragedy, the factory was unable to manufacture and supply some of the world’s best known clothing brands, resulting in negative international coverage for the companies involved.

As the scale of human tragedy unfolded, the clothing manufacturer Primark, which sources its garments from the Rana Plaza factory, and, which is owned by Associated British Foods, took the surprising step of offering pre-emptive and unilateral concessions. These came in the form of compensation to the victims and their families, including short-term wage payments, and the involvement of the Dhaka University, independent doctors, unions and non-governmental organisations to assess future long-term compensation.

By taking early action and granting one-sided concessions, Primark was able to make a positive statement about its Corporate Citizenship and gain the praise of important labour rights advocates. Most importantly it was able to improve the suffering of those affected, and to be proactive in creating changes in industry practices, and setting a precedent for others to follow. The power of this action was displayed when another client of the Rana Plaza factory, Canadian groceries giant Loblaw Companies Ltd said that it would follow the Primark funding framework, and as a separate act contribute $1 million to Save the Children in Bangladesh, and the Centre for Rehabilitation of the Paralysed.

This article highlights the mutual gains that can come from granting unilateral concessions during a tragedy. The many companies that have chosen to be laggards in their response to the Rana plaza tragedy are now likely to confront stakeholders who will hold a mindset of retribution and want to shame them to the negotiating table to demand high cost concessions. If this does happen they will have incurred unnecessary brand damage and more importantly delayed the opportunity to improve the hardship of the victims and families of those who died and were injured.